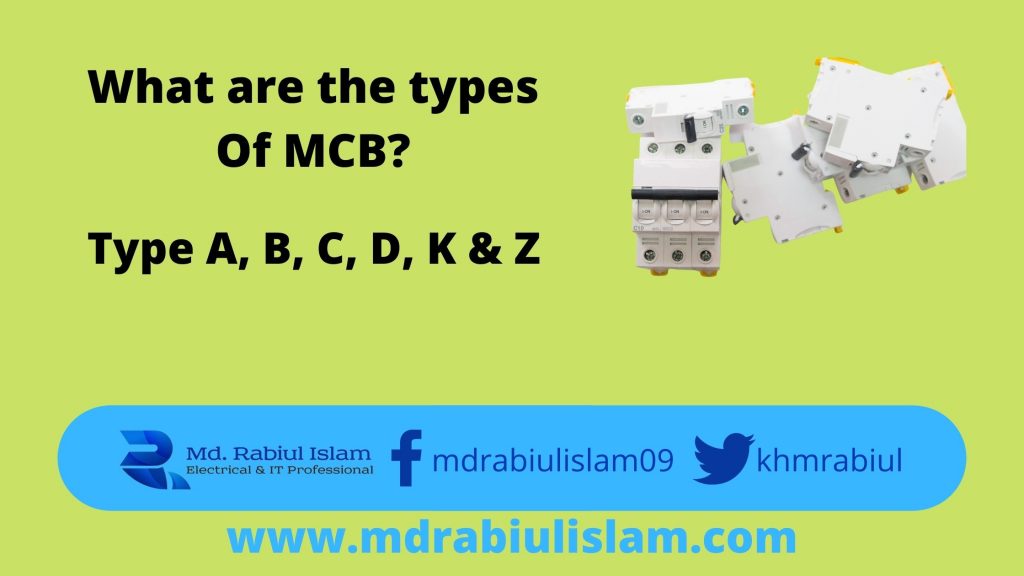 What is an MCB?

MCB stand for miniature circuit breaker. It is an electromechanical device that switches off the circuit if any abnormality is detected. MCB easily senses the overcurrent caused by short circuit or over load condition.

The miniature circuit breaker has a straightforward working principle. Additionally, it has two contracts; one is fixed and other is movable.

If the current increases, the movable contract is disconnected from fixed contract, making the circuit open and disconnects them from the main supply.

Types of MCB Based on Tripping Characteristics

MCBs are classified into different types according to tripping over the range of fault current. The important types are A, B, C, D, K and Z.

This type MCB is mainly used for the protection of highly sensitive devices like semiconductor.

Type B MCB trips when the current reaches 3 to 5 times the rated current with an operating time of 0.04 to 13 Seconds. Type B miniature circuit breaker (MCB) is used for purely resistive loads, such as lighting circuit.

This type MCBs are widely used in commercial and industrial sector. These are used with inductive loads like motors, fans, transformers etc. Type C MCB trips when current reaches 5 to 10 times than the rated current with an operating time of 0.04 to 5 Seconds.

Type D MCB trips when the current reaches 10 to 20 times the rated current with an operating time of 0.04 to 3 Seconds. This type MCB is used for highly inductive loads like heavy motors, x-ray, welding machine etc.

This type miniature circuit breaker trips when the current reaches 8 to 12 times than the rated current with an operating time of less than 0.1 Second. This Type MCB is used for inductive load where have a chance of high inrush current.

Type Z MCB is also operates in less than 0.1 Second Like Type K MCB, if the current reaches 2 to 3 times than the rated current.

How to know MCB type?

The type of an MCB is usually written just before/with the ampere rating written in the front end of MCB. Look at the picture below, the red arrow and circle are indicating the type of the MCB. It is a Type C MCB with 20 ampere rated current.

C 20A indicates that, the type of the MCB is C and current rating is 20 ampere.